from visitors all around the world. I appreciate your interest in my work and sensitivity

revealed from your letters. Many of you asked  about my background and

my thoughts on photography. I hope this response will help you to understand my

work and philosophy behind it. 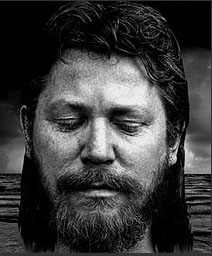 I  was born in 1946, the first year after the World War II. My parents just survived hardships

of evacuation and returned back home to Riga, then under Soviet occupation.

I  grew up among Russian speaking population of Latvia, and Russian culture become my root culture.

I graduated from the technical college as aviation engineer but never worked as such,

instead I joined Riga Motion Studios as a designer of equipment for special effects.

I  was in my early twenties and mostly ignorant about art. At this time social realism was an official

culture of the country and I did not care about it too much. Information about modern western

art was hardly available  and my knowledge of it was  highly limited.

I  started to photograph when I was nineteen, driven by desire to create my own personal style and vision.

I  was involved in portraiture and did some documentary shots, but soon realized the results did not satisfy me.

I  put my camera aside and concentrated on reading (Dostoevsky, Bulgakov)

and cinematography (Tarkovsky, Parajanov). I was constantly looking for the way to express

One year later it came to me clear and simple.

I decided to photograph Concepts.

In 1972 I created my first, and most important image - Confession.

from this image become a backbone of the work I have produced since.

In 1974, after years of disgust with communist authorities, I left my country and arrived in USA.

Do I point my camera outwards to the existing world or  turn it inward towards my soul.

Am I  taking photographs of existing reality, or creating my own world, so real but non existent.

Results from this two opposite approaches are notably different and, in my opinion, conceptual

painting, poetry, music and sculpture. It employs the special talent of intuitive vision.

By translating the personal concepts into the language of photography, it reflects the possible

answers to major questions of being: birth, death and life.

Creating an idea and transforming it into reality  is an essential process  of conceptual photography .

But introduction of digital photography can change this balance.

The ease of producing altered realities, will bring a new wave of talented artists, who will use it

to express their special world of visions, with all its meanings, symbols and mystery.

In a world of high technology will you still believe in truthfulness of a photograph?

And does it matter?

To me it matters. In all these years of creating conceptual images, I tried to make them as realistic

as possible. My technical abilities have improved, allowing me to broaden horizons for my ideas.

But this is not the most important part of the process.

Therefore, the most important ingredient of the powerful image is a concept.

It is not a new idea to manipulate photographic images. As a matter of fact all images are

manipulated to a certain degree. The real power of photography emerges when

altered reality is presented as existent and is expected to be perceived as such.

was captured by the camera has to exist. In the best examples of successfully

manipulated images the question "Is it real?" does not arise.

techniques are. Each has it's bright and dark spots. At this moment  I don't see any

reason to switch to digital. I still prefer glowing quality of original print and the laborious

process to achieve it.  Yet, I believe, that it is only matter of time before digital technology

replaces analog and the conceptual approach will receive well deserved place in Art of Photography.

The greatest power of the photograph, its straight-forward truthfulness, has been lost forever.

Before the computer era people believed that the photograph in front of them was a truthful representation of reality.

No more -- thanks to Photoshop and digital editing.

Nowadays photography emerges from the stage of innocents and enters the fast world of changes -- no chemicals, no darkness   and no mistakes.

My technique is unforgiving. Mistakes can be made, but not corrected.  A trace of fear of making a mistake is present in  every image I have made.

I check twice every move when I am printing. All limitations and imperfections of my elaborate    process add to the power of the image with blade-line simplicity.

The power of a good image comes from its soul no matter if this soul is analog or digital. Good image is alive and talks to me in a magnetic language of feelings.

The Power of a Pencil

Both are the writing tools. Keyboard is precise, fast, has many tools, mistakes can be quickly corrected and changes can be made instantly.

No sharpening, no erasers, no hard surface beneath.

But using the pencil you create a writing witch has an extra dimension. It has your physical presents and reflects your personal character.

It will look like nothing else in this world. It will have a human touch. Your touch. It will have the imperfections that makes it alive.

Keyboard product cant be object of art by itself. Pencils can.

I feel the same way thinking about transformation of photography.

Digital imaging has no limitations. The only limit is imagination of the person using it.

Its easy to use, is very forgiving and in the hands of a good artist it is a convenient tool to produce a good art.

But one very important dimension will be always missing in digital art. And this missing quality will be the imperfection of a human hand.

And this imperfection adds an extra notch to the scale of beauty and importance.